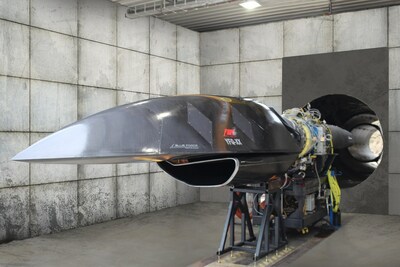 As announced in Mar 2022 BFT, an agile aerospace and defense company based in North Carolina, is maturing a high-performance uncrewed 5th generation fighter design that provides replication of pacing threats at a fraction of the cost of a crewed fighter. The air vehicle technology developed under Bandit supports uncrewed adversary air training objectives relevant to the Air Force, Navy and Marine Corps and can be adapted for other Autonomous Collaborative Platform (ACP) mission areas. The Bandit program further demonstrates the impact that small businesses can have in the defense industrial base.

AFRL, in collaboration with BFT, is exploring the value of digital engineering to expedite ground and flight test by harnessing the artifacts generated through digital analysis as proof of capability. This ground test provided high-fidelity data that will be used in validation of computational methods over the coming months.

"On an uncrewed fighter like Fury, proper integration of the propulsion flowpath is the most significant design driver for the overall vehicle. It was crucial to us to demonstrate, prior to building flight test aircraft, that we could correctly predict the interaction between the propulsion flowpath components and the Williams International engine," said Scott Bledsoe, President of Blue Force Technologies.

Leading into testing, the BFT and AFRL team performed time-accurate computational fluid dynamics (CFD) analysis which leveraged the extensive computational resources of AFRL and Army Engineer Research and Development Center. The purpose of the test was to validate the analysis to gain confidence by the team in using the CFD tool in other portions of the flight envelope. "With AFRL's help, we are further building out our digital engineering toolchain to enable future ACP variants to be designed quickly," said Bledsoe.

"The Bandit program is about demonstrating ever tighter model-to-hardware prototype development cycles for autonomous collaborative platforms, and this integrated propulsion flowpath test is indicative of that approach. After making the engine selection in June 2022, the AFRL and Blue Force Technologies team worked to finalize test objectives and procedures concurrently with Blue Force's hardware build to ensure this full-scale test came together in under six months," said Alyson Turri, AFRL Bandit Program Manager.

For inquiries or corrections to Press Releases, please reach out to Cision.
✕
× Close Ad