TCI and Kalmar Ottawa are joining together to celebrate the Annual Military Appreciation Month and outwardly honor all members of the United States Armed Services.

COMMERCE, Calif., May 29, 2022 (GLOBE NEWSWIRE) -- Kalmar Ottawa's Military Wrapped Truck contest presented a fantastic opportunity for area businesses to showcase their dedication to recruiting and honoring veterans. TCI enthusiastically participated and was humbled to be declared the winner on May 6.

Kalmar Ottawa invited all authorized dealers to enter the contest, which was designed to recognize the courage and sacrifices of service members past and present. Each participant was asked to submit a marketing plan describing how they intended to utilize the vehicle to show respect for the armed services and support for hiring veterans.

While Kalmar and TCI take strides to employ and support armed service members and their families throughout the year, May was a particularly fitting month for the contest because it has been recognized as National Military Appreciation Month since 1999, reminding everyone to show appreciation for those who serve.

As the winner of this year's contest, TCI will own the truck with the custom wrap design and take home $5,000 in co-op funds to be used in the execution of TCI's proposed marketing plan. Upon receiving this award, Martha Servin of TCI stated, "As the General Manager for the Ottawa division, I speak for the entire team when I say we are extremely grateful to have been awarded the military wrapped unit. This will enable us to continue to bring awareness to this amazing cause."

During the official announcement, Kalmar's team stated: "TCI's plan made it apparent how much they value military personnel in their day-to-day business and how they plan to bring even more awareness using the Ottawa unit. Due to their creativity and passion for the cause, TCI Transportation is our campaign winner."

With decades in the industry, both TCI and Kalmar have deep roots in the local community and are proud to be able to give back. Not only do they both continue to expand services, but this contest and campaign prove that their investments in the area go far beyond business. Prior to this contest, TCI bid $100,000 to win the pink Breast Cancer Awareness wrapped yard spotter and donated over $21,000 to the Susan G. Komen Foundation, showing support for yet another cause that's close to the heart of the TCI team.

TCI Transportation began in 1978 as a small, family-owned operation. With continuous expansion, TCI now has 16 locations offering equipment leasing, dedicated transport, intermodal, truckload, logistics, and freight services. Still, the TCI team holds on to its community roots and family values, prioritizing customers, locals, and team members above all else. 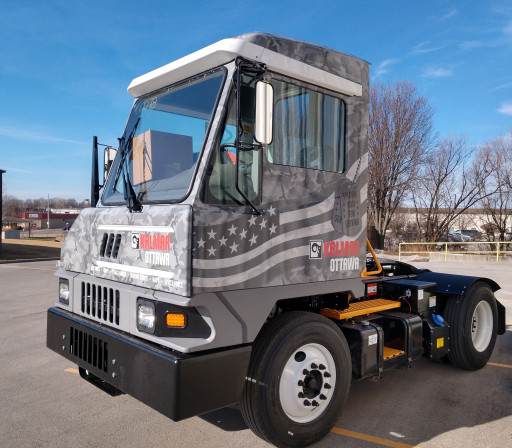 
This content was issued through the press release distribution service at Newswire.com.