How Do Severe Storms Develop?

Have you ever wondered what it takes for severe thunderstorms to develop? Well look no more. Here are the primary ingredients required for severe storms.

Wind Shear – While instability is required for thunderstorms, they may not become severe unless there is enough wind shear. Wind shear is wind changing direction and/or speed with height. This allows storms to tilt and rotate allowing them to last much longer than ordinary thunderstorms do.

Lift – You typically need something to force air to rise. While instability will force air to rise, you will often need something to get the parcel of warm & moist air to start rising. This can come in the form of mountains, fronts, and boundaries. However, seeing as Central Illinois is void of mountains, cold fronts, warm fronts and outflow boundaries can act as our lifting mechanisms.

Moisture – If an approaching area of low pressure is the engine, then low-level moisture is the fuel for these storms. For storms to become severe, we need moisture. This moisture often comes from the Gulf of Mexico. The more moisture we have, the greater the instability will be giving us a greater possibility of severe storms.

How Do Tornadoes Develop?

While pinpointing exactly when and where a tornado will touchdown, we can (with reasonable accuracy) forecast days in advance when conditions are right for them to develop. Once we find that the atmosphere will be unstable enough for thunderstorms, we’ll look at the amount of wind shear that’s in place to see if any of these storms can become severe.

In order for tornadoes to form, you need to have a significant amount of wind shear. This is wind changing direction and or speed with height. In the typical tornado set up, you’ll have southeasterly winds at the surface, a fast-moving low-level jet a few thousand feet off of the ground moving in from the south with the jet stream moving from the west at 25-35 thousand feet.

Due to the change in wind direction and wind speed with height, air will begin to rotate horizontally. As storms begin to develop, these horizontal rolling tubes of air will be absorbed by a thunderstorm’s updraft allowing that storm to take on rotation. As the storm’s rotation tightens, the base of the storm will lower eventually leading to the development of a tornado.

While tornadoes are possible anytime of year, they are more common in late Spring and early summer across Illinois. On average, Illinois sees 12 tornadoes in April, 15 tornadoes in May and 10 tornadoes in June. The reason tornadoes are more likely this time of year is due to the Jet Stream retreating north for the Summer months. This allows warm moist air from the Gulf of Mexico to interact with cool dry air coming from the north. With the Jet Stream positioned over Illinois from April through June, it allows severe storms to develop.

Once summer arrives, the Jet Stream is typically positioned across the northern U.S. and southern Canada.This will keep the bulk of the wind shear north of Illinois lowering the overall risk for tornadoes. You will notice that there is a slight increase in tornadic activity in November. This is often seen as Illinois’ “Second Severe Weather Season” as the jet stream begins to drop south for the winter. While November is typically seen as a colder month and a time of year we start to talk about snow, tornadoes are still very possible…such as the Washington tornado on November 17th, 2013.

How Does Hail Form?

Hail forms when powerful updrafts send water droplets to the top of a thunderstorm where temperatures are below freezing. When these water droplets move in to an environment where they become super-cooled or freeze in to ice pellets. As these supercooled water droplets and ice pellets run in to one another they will grow in to larger and larger hailstones. The hail will remain in the storm until it becomes too heavy and falls to the ground.

It’s important to plan ahead in the event of a severe weather outbreak. Even though severe weather may not be on the mind when the weather is cold, it’s the perfect time to have a plan in place for when the time comes. here are some tips to keep you and your family safe.

Make sure you understand what types of severe weather could potentially impact your area.

Know the Difference Between a Watch and a Warning

WMBD and WYZZ are Weather-Ready Nation Ambassadors and will be partnering with Midland Radio Corporation, Walgreens and Hy-Vee to sell weather radios across Central Illinois. Stay tuned for upcoming events where Your Local Weather Authority and members from the NWS along with Emergency Managers will team up to program Midland Weather Radios. 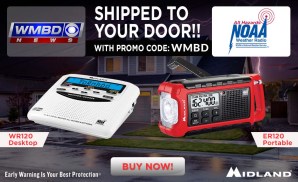 Need a gift you can easily pack? Give them a scarf …

12 best Elf on the Shelf accessories

Best gifts for a best friend

What are our chances of a white Christmas in Central …